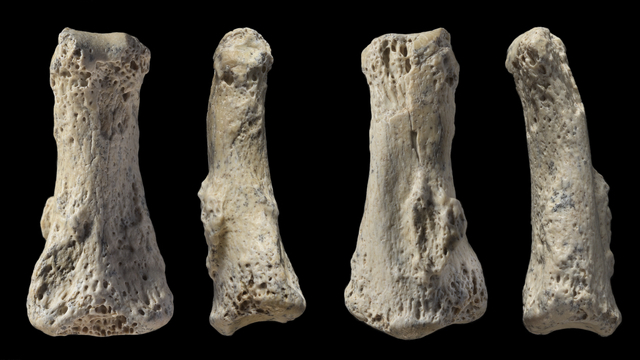 A fossilized Homo sapiens finger bone discovered by archaeologists working in the Nefud Desert of Saudi Arabia in 2016 is approximately 88,000 years old, according to a study published in Nature Ecology and Evolution today (April 9). This is the oldest human fossil found outside of Africa and the Levant—the region that includes modern-day Israel, Palestine, Lebanon, and Jordan. It indicates that humans dispersed from Africa sooner than archaeologists previously believed.

“This discovery for the first time conclusively shows that early members of our species colonized an expansive region of southwest Asia and were not just restricted to the Levant,” says study coauthor Huw Groucutt, an archaeologist at the University of Oxford in the U.K., in a statement. “The ability of these early people to widely colonize this region casts doubt on long held views...

See “Humans Lived in Southeast Asia More Than 60,000 Years Ago”

Iyad Zalmout, a paleontologist at the Saudi Geological Survey, discovered the fossil at an archaeological site at Al Wusta, Saudi Arabia, on January 20, 2016. He tells Newsweek that he wasn’t sure what species it was at first. “[I scratched] my head for a few minutes as I tried to build a picture of who or what this bone belonged to,” he says.

Zalmout’s colleagues conducted a 3-D scan of the 3.2-cm-long fossil and compared its shape to finger bones of other Homo sapiens as well as other primates and Neanderthals. The results confirmed that the bone belonged to a human. Using uranium series dating, the researchers determined that the specimen was approximately 88,000 years old. An examination of the discovery site revealed that it was a monsoon-fed lake in a semi-arid grassland at that time.

“The Arabian Peninsula has long been considered to be far from the main stage of human evolution,” study coauthor Michael Petraglia, an archaeologist at the Max Planck Institute for the Science of Human History, says in the statement. “This discovery firmly puts Arabia on the map as a key region for understanding our origins and expansion to the rest of the world.”