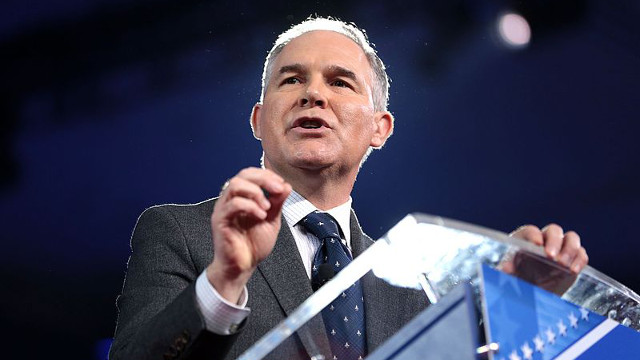 WIKIMEDIA, GAGE SKIDMOREThis week (March 29), the US House of Representatives passed the Honest and Open New EPA Science Treatment Act, or HONEST Act, with a vote of 228-194. The Act would restrict the science considered by the Environmental Protection Agency (EPA) when developing new regulations, to only research that is publicly available.

This may sound like a positive push for transparency—“this legislation ensures that sound science is the basis for EPA decisions and regulatory actions,” Representative Lamar Smith (R-Texas), chairman of the House science committee, told his fellow representatives this week (via The Hill). But it may actually limit the EPA’s ability to enact evidence-based regulations. “Democrats, environmentalists and health advocates say the HONEST Act is intended to handcuff the EPA,” The Hill reported.

“In reality, this bill isn’t about science,” Representative Eddie Bernice Johnson (D-Texas), the science committee’s top Democrat, told the House (via The Hill...

“The so-called ‘HONEST Act’ is a Trojan-horse transparency bill that, among other things, would make it harder for the EPA to use public health studies to finalize science-based public health protections,” Andrew Rosenberg of the Union of Concerned Scientists, an advocacy organization, agreed in a statement. “That makes no sense.”

The same day that the House passed the HONEST Act, EPA Administrator Scott Pruitt, overruled his agency’s own recommendations on insecticides known as chlorpyrifos, rejecting a petition to ban use of these compounds, The New York Times reported. “By reversing the previous administration’s steps to ban one of the most widely used pesticides in the world, we are returning to using sound science in decision-making—rather than predetermined results,” Pruitt said in a statement.

The petition, filed by environmental groups some 10 years ago, was supported by the conclusion of EPA chemical safety experts, who late last year recommended a complete ban on chlorpyrifos because of the human health risks associated with the compounds, including brain damage and cognitive decline. (Chlorpyrifos pesticides have already been banned for most household uses, but the chemicals are still widely used in agriculture.)

The US Department of Agriculture and Dow Agrosciences, which sells chlorpyrifos, praised Pruitt’s ruling, while others attacked it as another anti-science move from the Trump administration. “They are ignoring the science that is pretty solid,” Jim Jones, who previously ran the EPA’s chemical safety unit, told The New York Times.

The EPA said that it will continue to study chlorpyrifos, NPR’s The Salt reported, but Pruitt’s rejection of the pesticide ban is considered the “final agency action” on this issue, The New York Times noted, “suggesting that the matter would not likely be revisited until 2022, the next time the EPA is formally required to re-evaluate the safety of the pesticide.”