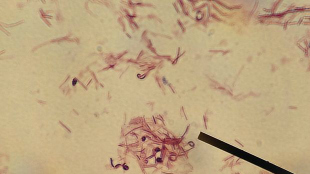 WIKIMEDIA, BSIMON2014The clinical evidence is mounting that probiotics may be beneficial for certain conditions, but the mechanisms behind these reported benefits are less clear. In a study of a dozen senior adults who ate a particular bacterium, Lactobacillus rhamnosus (LGG), the transcriptional profiles of other bacteria in the volunteers’ guts changed.

“We found that LGG transiently enriches for functions to potentially promote anti-inflammatory pathways in the resident microbes,” the authors wrote in their report, published in mBio this week (April 14).

LGG is a popular dietary supplement, which the study participants ate twice a day for about a month. Analyzing stool samples before and after the trial, Claire Fraser of the University of Maryland School of Medicine and her colleagues showed that the microbial composition didn’t seem to change much.

Rather, the changes the researchers observed occurred at the level of particular transcripts. “We found evidence for differential expression...

“This is a new idea, that some probiotics may work by affecting the overall ecosystem of the gut,” Fraser said in a press release. “Previously we tended to think that LGG and other probiotics worked directly on the host.”