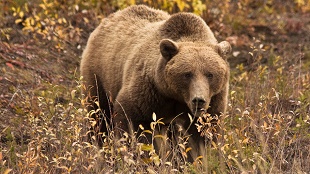 Bears pack on the pounds—up to twice their weight—before hibernating. Being obese and sedentary can lead to insulin resistance and, eventually, type 2 diabetes in humans and other species, but grizzly bears dodge the disease. A study published this week (August 5) in Cell Metabolism showed the bears’ insulin sensitivity is reversed during hibernation.

Lynne Nelson of Washington State University in Pullman and her colleagues studied weight fluctuations in six captive grizzly bears over the course of a year to understand how the animals adapted. They discovered that, unlike humans, the bears remained highly sensitive to insulin even at their heaviest: a tiny dose that a person might take proved nearly lethal to the 700-pound grizzlies.

“The results were so different from what we see in humans and rodents that we were all very skeptical at first,” coauthor...

Molecular studies revealed that this insulin sensitivity was controlled by a protein called PTEN. In the fall, PTEN signaling was switched “off” in bear fat cells, which kept the animals responsive to insulin, allowing them to bulk up. Well into the hibernation process, the bears became insulin-resistant. This process was reversed in the springtime, when the animals emerged from hibernation with normal insulin sensitivity.

Further studies may help reveal molecular switches relevant to human diabetes, the authors suggested. The results are “provocative and interesting,” biologist Sandy Martin of the University of Colorado, Denver, told Science News. “They found a natural solution to a problem that we haven’t been able to solve.”