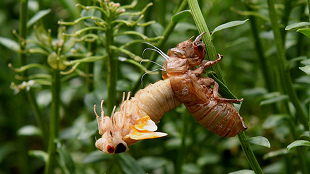 Cicadas have begun to swarm along the East Coast, following 17 years living underground and sucking on tree roots. But the mechanisms and evolutionary reasons behind the timing of the insects’ emergence remain mysterious, according to Nature.

The cicadas currently climbing up out of the ground in the northeastern and mid-Atlantic coast are part of Brood II, one of 12 broods that emerge on a 17-year cycle. Three other broods further south emerge every 13 years.

Scientists believe that the mass emergences are meant to overwhelm predators—they may be able to get some good mouthfuls of cicadas, but they won’t be able to decimate the population. Most of the emerging cicadas manage to mate and lay their eggs before their lives rapidly come to an end. The cicadas may emerge at prime intervals because it is less likely that predators will synchronize their cycles to the insects....

It is less clear how the cicadas keep track of when they are supposed to dig their way out of the ground. Cicada biologists like to look for individuals that are emerging at anomalous times. For instance, Nature reported that in 2007 one brood of cicadas emerged a year early after unusual weather patterns caused trees to grow leaves, drop them, and then grow leaves again in a single winter. This led scientists to suspect that cicadas count the years based on tree leafing cycles.

Researchers are also trying to understand how the 13-year broods and the 17-year broods diverged from each other, in hopes of shedding on what drives these highly specific lifecycles. University of Connecticut evolutionary biologist Chris Simon and colleagues have studied the genetics of cicadas and found that 13-year and 17-year cicadas have split off from each other repeatedly. She suspects new broods may descend from cicadas that accidentally emerge at the wrong time. “It’s a way of having instant speciation,” Simon told Nature. “This ability to jump through time is something that has not been seen before in other organisms.”