WIKIMEDIA, BEN MILLSThe psychedelic drug lysergic acid diethylamide (LSD) is known for its euphoric effects, and for inducing long “trips.” Now, in two studies published last week (one in Current Biology, the other in Cell), scientists have examined how LSD produces such diverse effects and why the drug takes so long to wear off. The results of both studies suggest that LSD’s effects are mediated by the serotonin 2A receptor, and that the drug is just the right shape to bind this receptor for extended periods of time.

For the Cell study, researchers imaged LSD binding various serotonin receptors, observing that the drug clings to these structures in a unique way. This could explain why the effects of LSD take some time to wear off. “What we saw is that the receptor is shaped a little bit like a vase, and it has a space in the middle where the LSD binds and there’s a lid above it,” coauthor Daniel Wacker of the University of North Carolina, Chapel Hill, told The Verge. “LSD has this unique property that it actually holds onto the lid. For many other compounds like serotonin, the lid remains rather flexible. Because LSD holds onto it, it really stays in there.”

According to The Guardian, “In future, the findings could help chemists produce shorter-acting versions of the drug that may be more suited to clinical use for anxiety or post traumatic stress disorder.” 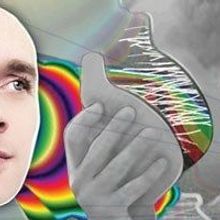