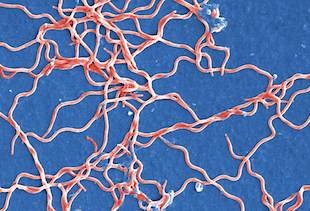 The bacterium that causes Lyme disease spreads aggressively throughout the body, but little is known about how it so effectively moves. In a paper published last week (August 25) in Cell Reports, researchers from the University of Toronto show that the bacterium, Borrelia burgdorferi, rapidly grabs and releases its host’s blood vessel-lining endothelial cells  with a protein that acts like a grappling hook. “This mechanism is how the bacteria can overcome the fast flow of blood and avoid getting swept away,” study coauthor Rhodaba Ebady of Toronto told Scientific American.

B. burgdorferi enters the body through a tick bite, usually leaving a distinctive bull’s-eye rash. Symptoms include fever, headache, and fatigue, and—if left untreated—the infection can cause joint pain, heart problems, and nerve damage, according to the US Centers for Disease Control and Prevention. These wide-ranging symptoms are the...

Ebady and colleagues simulated the conditions of a blood vessel in the lab, observing B. burgdorferi through a microscope as it clung to endothelial cells. They found that the bacterium produces a protein called BBK32, which latches onto cell walls and forms special linkages called “catch bonds,” which grow stronger under tension. By attaching and detaching these proteins, B. burgdorferi works its way down blood vessels without losing control, which accounts for its ability to navigate the blood stream.

White blood cells also use catch bonds to travel blood vessels. “It’s really an amazing case of convergent evolution,” Wendy Thomas, a biologist at the University of Washington in Seattle who also was not involved in the research, told Science News.