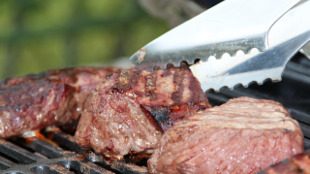 Some of the adverse effects associated with eating red meat are mediated by gut bacteria. Red meat contains large amounts of L-carnitine, a nutrient that gut microbes convert into trimethylamine (TMA). In the liver, TMA becomes trimethylamine N-oxide (TMAO), which is known to hasten the formation of arterial plaques that can lead to heart attacks and strokes.

A new study of mice genetically prone to atherosclerosis, published yesterday (November 4) in Cell Metabolism, has found that other types of gut microbes produce a different molecule, gamma-butyrobetaine, at a 1,000-fold higher rate than TMA, a process that also leads to TMAO formation and atherosclerosis.

The results suggest that...

“The findings identify the pathways and participants involved more clearly, and help identify targets for therapies for interventions to block or prevent heart disease development,” said study coauthor Stanley Hazen of the Cleveland Clinic in a press release. “While this is into the future, the present studies may help us to develop an intervention that allows one to ‘have their steak and eat it too’ with less concern for developing heart disease.”