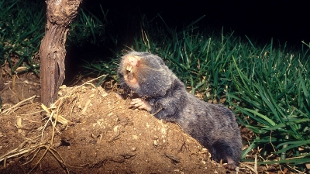 Blind mole ratWikimedia, Bassem18 When cells taken from blind mole-rats proliferate too many times, the cells die en-masse, suggesting a possible mechanism for how these animals keep pre-cancerous cells from developing into full-fledged disease. The study, published last week (October 5) in the Proceedings of the National Academy of Sciences, could point to new insights into controlling cancer, according to the authors.

Blind mole-rats, like their relatives the impervious naked mole-rat, live relatively long lives—about 21 years—yet never develop cancer.  Although previous research found a genetic basis for the naked mole-rat’s immunity to cancer, the blind mole-rat appears to use a different mechanism for fending off the disease. (Read more about the remarkable naked mole rat in “Underground Supermodels,” The Scientist, June 2012.)

The researchers cultured cells from two species of blind mole-rats that inhabit the Judean Mountains of Israel. After about 7 to 20...

Although the results have potential implications for research on aging and cancer, some researchers think that the cell culture results are not representative of what happens in the animals’ bodies. “It’s possible that the culture conditions are causing increased stress on the cells, resulting in cell death,” Jerry Shay, who studies mechanisms of cellular ageing and death at the University of Texas Southwestern Medical Center in Dallas, told Nature.