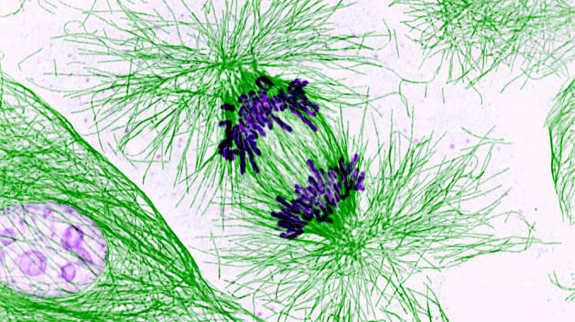 Dividing cells showing chromosomes (purple) and cell skeleton (green)FLICKR, NIH IMAGE GALLERGYAbout 800 million years ago, the first multicellular organisms arose from their single-celled ancestors—an event that would occur at least two dozen times over the course of evolution. According to a study published last week (January 7) in eLife, one key to this transition is a molecule called GKPID, which is involved in tissue growth.

Specifically, University of Chicago evolutionary biologist Joseph Thornton and his colleagues found that GKPID links proteins that bind chromosomes during cell division with the inner side of the cell membrane, so that cells can properly separate and form an organized structure. “I think of it as a molecular carabiner,” Thornton told The New York Times.

Tracking the evolution of the genes for GKPID, the researchers determined the ancestral sequence that likely existed in single-celled ancestors,...

“Genetically, it was much easier than we thought possible,” Thornton told The New York Times. “You don’t need some elaborate series of thousands of mutations in just the right order.”