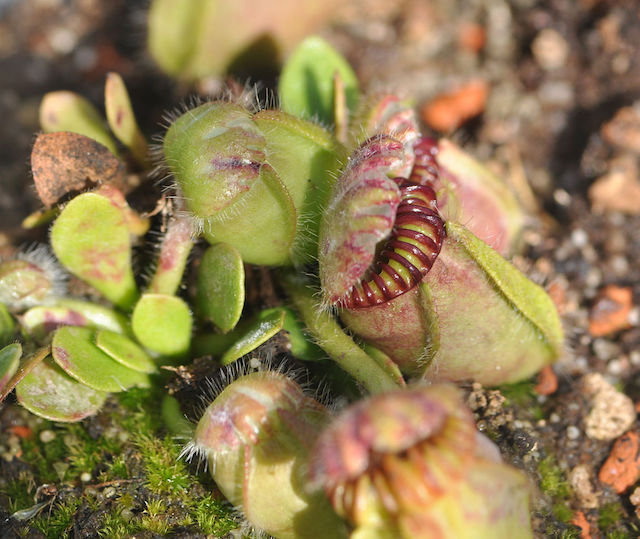 AMADA44, WIKIMEDIA The Australian pitcher plant, Cephalotus follicularis, waits patiently for its prey to land on its mouth-like leaves, fall into its slippery pouch, and drown in a cocktail of digestive enzymes. These carnivorous plants may have evolved in similar ways to other, unrelated meat-eating plants around the globe, according to a February 6 study in Nature Ecology and Evolution.

Previous investigations had revealed that Australian pitcher plants are more closely related to the non-carnivorous starfruit, Averrhoa carambola, than pitcher plants from other continents. This suggested that carnivory evolved repeatedly in plants, likely to cope with nutrient-scarce soils, Victor Albert, a plant-genome scientist at the University of Buffalo told Nature. “What they’re trying to do is capture nitrogen and phosphorus from their prey,” he added.

Albert and colleagues sequenced the Australian pitcher plant’s genome and compared the DNA in the plant’s carnivorous and non-carnivorous photosynthetic leaves....

When the group compared Australian pitcher plant’s digestive fluid to that of three unrelated carnivorous plants, the results suggested that—despite the fact that the plants evolved separately—their digestive enzymes had similar genetic origins. “In a number of cases, the very same genes from non-carnivorous ancestors have been recruited for carnivorous purposes," Thomas Givnish, who studies plant evolution at the University of Wisconsin who was not involved in the study, told NPR.

In an interview with NPR, Albert added: "The pathways to evolving a carnivorous plant, and in particular, to a pitcher plant, may be very restricted.”