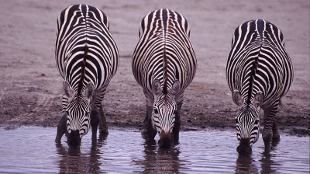 Many a fable and tale propose preposterous theories about how the zebra got its stripes, but now science has finally provided a possible answer. According to new research published in the Journal of Experimental Biology, zebras’ black-and-white coloration helps protect the equids from blood-sucking horseflies, which find the stripes unattractive.

It’s all about how light is reflected, Susanne Akesson from Lund University told BBC Nature. Akesson found that in the black and brown horses, the light that is reflected is horizontally polarized, which was very attractive to flies. "From a white coat, you get unpolarized light," she explained, which doesn’t adhere to a specific plane. This the flies find less attractive.

Given the flies’ penchant for dark coats, Akesson and her colleagues wondered how zebras might fare. They placed boards that were all black, all white, and black-and-white striped in a field , covered...

But whether or not the flies are the true reason for the zebras’ stripes remains to be seen. "Above all, for this explanation to be true, the authors would have to show that tabanid fly bites are a major selection pressure on zebras, but not on horses and donkeys found elsewhere in the world... none of which are stripy," evolutionary biologist Matthew Cob of the University of Manchester told BBC. "My hunch is that there is not a single explanation and that many factors are involved in the zebra's stripes.