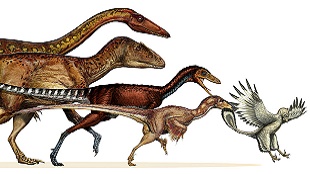 SCIENCE, DAVIDE BONNADONNASongbirds and fluffy chicks are known to be the descendants of monstrous dinosaurs, but exactly how certain lineages evolved into today’s birds has been a mystery. A steady shrinking of one group, bipedal carnivores known as theropods, may have driven the dinosaur-bird transition, according to results published last week (August 1) in Science.

An analysis of nearly 120 dinosaur species and more than 1,500 skeletal features revealed that the theropod lineages that are thought to have been direct ancestors of birds evolved skeletal adaptations four times faster than other dinosaurs. These avian ancestors consistently miniaturized over a 50-million-year period, which likely facilitated the evolution of flight, and features such as skulls with shorter snouts, but bigger brains and eyes, the authors noted.

“What was impressive was the consistency of the size change along the dinosaur-to-bird transition, with every descendant smaller than its ancestor,” study author Michael...

Tinier theropods may have found it easier to adapt to different resources—such as habitats or prey—than their larger kin. “It would have permitted them to chase insects, climb trees, leap and glide, and eventually develop powered flight,” Lee told The Washington Post. “All of these activities would have led to novel new anatomical adaptations.”

Lee and his coauthors identified 12 significant evolutionary time points during which theropods branched into different lineages. One key distinction they observed was when a group called Tetanurae evolved an angled thigh bone, shifting their center of gravity forward into the posture of modern birds. The change “paved the way for flight, and would not have been possible at a larger body size,” Lee told New Scientist.

“When you are small, it’s a totally different ball game. You can fly and glide and I think that’s what drove it,” Paul Sereno of the University of Chicago who was not involved in the work told the Associated Press. Sereno described the analysis as innovative, and said the results were “key to what went on at the origin of birds.”