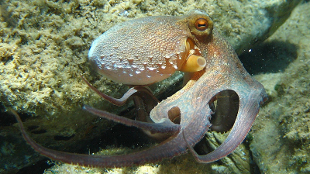 Octopi living in the near-freezing waters surrounding Antarctica use a clever trick to survive in the frigid conditions: they edit the RNA molecules of important nervous system proteins so that they are not affected by the cold temperatures, according to a study published last week in Science. The results are the first to suggest that RNA editing—as opposed to changes at the DNA level—can be at the root of adaptation, ScienceNOW reported.

Low temperatures are notorious for disrupting the functionality of proteins in the nervous system. The closing of the potassium channels in neuronal membranes, for example, can be delayed by the cold, affecting the neuron’s ability to reestablish its resting charge and prepare to fire again. Indeed, molecular neurophysiologist Joshua Rosenthal of the University of Puerto Rico Medical Sciences Campus in San Juan and his graduate student Sandra Garrett estimated that the Antarctic octopi’s channel would...

But when they compared their genes to a species of octopus from a warm, Puerto Rican reef, they found no changes in the DNA. It wasn’t until the researchers took a closer look at the RNA molecules that served as the code for the proteins that they found the answer. It turns out, the RNA for the Antarctic octopus’s channel is edited at nine different sites in a way that alters the amino acid sequence of the potassium channel, and helps it close more quickly despite the cold water temperatures.

“This process can be used to help adapt to the environment,” Rosenthal told ScienceNOW.

The paper “sets the stage for showing that RNA editing can have a big role in adaptation,” added geneticist Brenton Graveley of the University of Connecticut Health Center in Farmington.