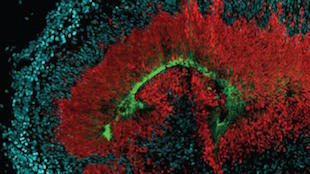 Stem cell–derived cerebral organoid: radial glia stem cells (red), neurons (blue), AXL receptors (green)ELIZABETH DI LULLO (VIA EUREKALERT)Evidence of a link between Zika virus infection and microcephaly continues to mount. And researchers at University of California, San Francisco (UCSF) have found a possible mechanism for how the mosquito-borne virus gains entry into brain cells: through the receptor protein AXL, which is commonly expressed in neural stem cells and developing retinal cells, according to a report published today (March 30) in Cell Stem Cell.

“While by no means a full explanation, we believe that the expression of AXL by these cell types is an important clue for how the Zika virus is able to produce such devastating cases of microcephaly, and it fits very nicely with the evidence that's available,” study coauthor Arnold Kriegstein of UCSF said in a statement.

The team also measured the protein’s expression in mouse and ferret brain cells and in human cerebral organoids—mini brains grown from stem cells. The researchers then used immunohistochemistry to track where AXL was most prevalent in these cells, finding that it tended to build up in places where the cells touch cerebrospinal fluid or blood vessels—routes the Zika virus may use to infiltrate brain tissue.

The findings add to evidence from a study published earlier this month (March 4), which demonstrated that Zika can infect and kill lab-grown neural progenitor cells.

“We can say for sure that Zika has the ability to infect neural progenitors, and this is a good explanation for why Zika is correlated with microcephaly,” neuroscientist Patricia Pestana Garcez of the Federal University of Rio de Janeiro, Brazil, who was not involved in the present study, told Nature.

AXL is not the only protein linked to Zika infection, however. In the statement, Kriegstein noted that further studies are needed to “move from ‘guilt by association’ and demonstrate that blocking this specific receptor can prevent infection.”