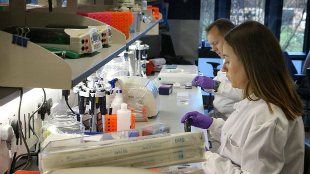 Memorial Sloan-Kettering, for instance, will invest in cancer immunotherapy. According to a press release from the institution, the gift from Ludwig Cancer Research is among the largest ever made to cancer research from a private organization. “The increased support will not only allow us to expand our Immune Monitoring Facility, but will also permit us to catalyze the field by providing funding for novel clinical trials that seek to clinically exploit the most important scientific discoveries in the area of cancer immunology,” Jedd...

At Stanford, where Ludwig funds have supported cancer stem cell research, the latest endowment will go toward immunotherapy research and a clinical trial on transplanting stem cells from the bone marrow of women with breast cancer. “The gift from Ludwig Cancer Research is truly historic,” Stanford President John Hennessy said in a statement.

According to ScienceInsider, recipients must conduct cancer research, but they are not required to submit progress reports or renewal applications. It “allows you to focus on what you think will yield the most important results without being concerned about meeting artificial intermediate deadlines,” Kenneth Kinzler, who co-directs the Ludwig center at Johns Hopkins University, told ScienceInsider.