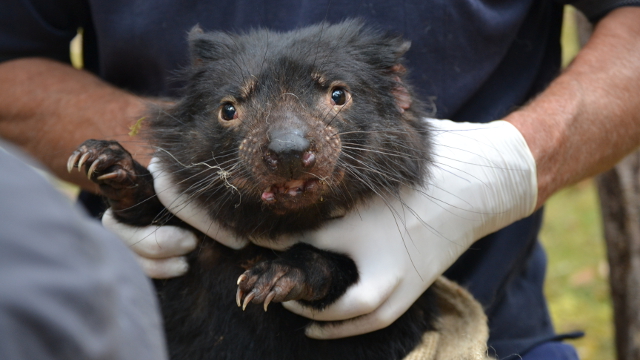 MAXIMILIAN STAMMNITZFor Tasmanian devils, fighting brings a double jeopardy: survive the initial wound of a bite to the face and you may find yourself with a fatal tumor down the road. That’s because the endangered marsupials are one of just a handful of species known to get cancers that are contagious. Two of the eight known types transmissible cancers affect Tasmanian devils, and they now threaten the survival of the species. In a study published today (April 9) in Cancer Cell, researchers report similar mutation patterns between the two diseases, as well was potential treatments.

“When the first one was discovered, we thought that transmissible cancers were extremely rare and that Tasmanian devils were just really unlucky to get this cancer,” says study coauthor Elizabeth Murchison, a geneticist at the University of Cambridge, in a statement. “But the emergence of the second one made us wonder whether...

To find out, Murchison and her colleagues took a closer look at the molecular features of the two cancers, and found similar patterns of mutation and tissues of origin for both. The similarities suggest that Tasmanian devils have features that make them particularly vulnerable to transmissible cancers, Murchison says—including, perhaps, their biting behavior. The researchers also screened more than 100 anticancer compounds to see whether they killed lab-grown cancer cells from the devils and found that both strains responded to inhibitors of proteins known as receptor tyrosine kinases.

“At present, there are few options for [devil facial tumor] treatment, and most animals succumb to disease,” the authors write in their report. “[T]he potential for orally delivered, targeted therapies offer considerable promise.”