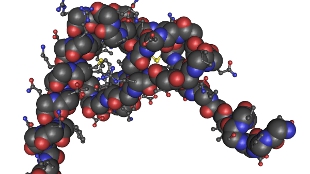 Human monocyte chemotactic protein-2, just one of the proteins that will be mapped by the Human Proteome ProjectWIKIMEDIA, NEVIT DILMENBig science rides again with the announcement that all is well with the Chromosome-centric Human Proteome Project (C-HPP), a 10-year initiative to map all the proteins produced by genes on human chromosomes. The C-HPP was launched last year, and organizers of the effort envision a close to their activities occurring in September of 2022. The current issue of the Journal of Proteome Research is devoted entirely updating the progress of the international teams of scientists involved with the C-HPP. The highlights from the special issue include:

- An update on the effort to characterize the protein-coding genes on male-specific regions of the Y chromosome, including genetic components involved with sex determination and reversal, spermatogenesis and male infertility, prostate cancer, sex-specific effects on the brain and behavior, and graft-versus-host disease....

- A report from the Biology/Disease-driven Human Proteome Project (B/D-HPP), which aims to identify proteins that play pivotal roles in a variety of diseases.

- A preliminary map of the proteome of chromosome 8, which has a very high mutation rate in humans and therefore could play an important role in tumorigenesis.

- The announcement of a new data integration and analysis software system and browser designed specifically for the C-HPP.

The issue contains many more updates on the progress of several groups working under the auspices of the C-HPP, and the group aims to publish such a special issue for every year of the project.