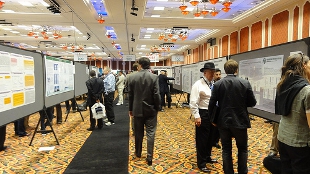 A poster sessionFlickr, ThinkGeoEnergyA clinical trial that claimed to treat six heart disease patients with induced pluripotent stem cells has been brought into question due to dubious reports about where the research had taken place and lead author Hisashi Moriguchi’s misrepresented institutional affiliations.

Moriguchi told Nature that his clinical trials were approved and conducted in Harvard facilities, which he lists as one of his affiliations. But, a Harvard communications officer told ScienceInsider that Moriguchi had only worked as a visiting fellow at Massachusetts General Hospital (MGH) "from late November through the end of December of 1999," and he "has not been associated with MGH or Harvard" since then.

On the heels of the Nobel Prize awarded for...

Last week (October 11), Moriguchi’s poster was taken down at annual gathering of stem cell researchers at Rockefeller University, when conference organizers began to suspect the research was invalid.  Investigations continue at the University of Tokyo, where Moriguchi still works in a lab, but only comes in once or twice a week.

Update (October 16, 2012): Hisashi Moriguchi held a press conference in New York on Saturday (October 13), the day after reports emerged questioning his clinical trial on an iPSC therapy for heart disease, admitting that he had lied about his research.