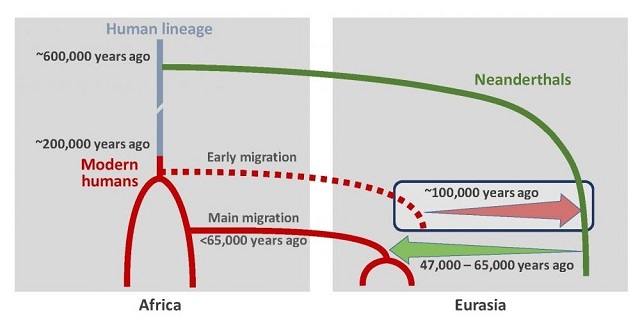 Interbreeding around 60,000 years ago (green arrow) accounts for Neanderthal DNA in modern humans; human DNA in the Neanderthal genome likely came about due to earlier interbreeding (red arrow).© ILAN GRONAU

Neanderthals diverged from modern humans at least 430,000 years ago. Research in the last decade has estimated that the two hominid groups interbred multiple times in the last 60,000 years, during encounters in the Middle East and, later, in Eastern Europe. But a study published in Nature on Wednesday (February 17) has provided evidence that humans also interbred with Neanderthals 40 millennia previously.

“An early modern human population left Africa much earlier than had been shown before,” study coauthor Sergi Castellano of Germany’s Max Planck Institute for Evolutionary Anthropology told The Guardian. These humans “met with Neanderthals, possibly those moving from Europe towards the East, some time around 100,000 years ago.”

To produce this estimate, the researchers...

“There is this joke in the population genetics community—there’s always one more interbreeding event,” Castellano told Nature. “As more early modern humans and archaic humans are found and sequenced, we’re going to see many more instances of interbreeding.”

Along with emerging evidence of 100,000-year-old Homo sapiens remains in caves in Israel and southern China, the team’s results are likely to convince researchers who have been sceptical about humans migrating out of Africa so long ago, Chris Stringer of the Natural History Museum in London, who was not involved in the study, told New Scientist. “The search is now on for further traces of these mysterious early moderns, and their Neanderthal relatives in Asia,” he said.