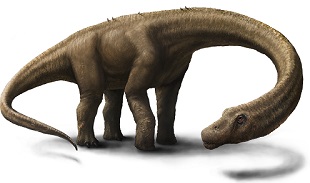 DREXEL UNIVERSITY, JENNIFER HALLTitanosaurs, a subgroup of plant-eating sauropods, were among the most enormous dinosaurs known to walk the earth. An exceptionally complete specimen of a new species provides a better estimate of just how colossal these herbivores were. The fossilized titanosaur, named Dreadnoughtus schrani, was discovered in Argentina and weighed approximately 59.3 metric tons (approximately 130,734 pounds), according to results published today (September 4) in Scientific Reports.

Previous titanosaur specimens were incomplete, provided few details of the animals’ anatomy, and were difficult to use to estimate overall size. Prior to this most recent discovery, the most complete older titanosaur specimen, of a species named Futalognkosaurus, lacked a skull, tail, and most of its limb bones.

Although other titanosaurs may have been heavier, “what we can say with certainty is this is the biggest land animal that we can actually put a number on,” study author...

This new specimen, first uncovered in 2005, took Lacovara and his colleagues four years to completely unearth. The team recovered nearly 200 bones, representing approximately 70 percent of the skeleton. “Most bones are exquisitely preserved, with details such as muscle scars and other osteological correlates of soft-tissues clearly discernible,” the authors wrote in their paper. The skeleton may have been so well-preserved because, as sedimentary deposits in the area suggest, a river flooded and “turned the ground into something like quicksand,” Lacovara said in a press release. “The rapid and deep burial of the Dreadnoughtus type specimen accounts for its extraordinary completeness. Its misfortune was our luck.”

The herbivorous heavyweight had a femur more than 6 feet long, a 37-foot-long neck, and an approximately 30-foot-long tail. Muscle scars on its vertebrae indicate Dreadnoughtus likely used its tail as a weapon. Based on the histology of its humerus bone, the authors suggest this individual was still growing at the time of its death.

The name Dreadnoughtus, which means “fearing nothing,” is derived from dreadnoughts, early 20th century battleships that were considered virtually impervious. “With a body the size of a house, the weight of a herd of elephants, and a weaponized tail, Dreadnoughtus would have feared nothing,” Lacovara said in the statement. “I think it's time the herbivores get their due for being the toughest creatures in an environment.”