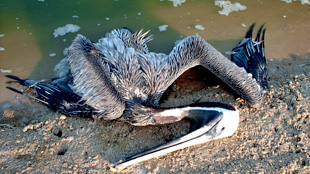 As hundreds of marine mammals and birds are found dead along the beaches of Peru, country officials are scratching their heads over what’s causing the massive die-offs. In the last few months, more than 1,000 pelicans have dropped dead along a 40-mile stretch of beach on the northern coast of Peru, as well as several sea lions, a turtle, and some 800 dolphins. The deaths have prompted the Peruvian health ministry to advise people to stay away from the beaches until further notice.

Last month, Peru’s Deputy Minister for Natural Resource Development said a morbillivirus outbreak could have been responsible for the dolphin deaths, BBC News reported. However a more recent report by an AccuWeather.com meteorologist suggests that warmer than average sea-surface temperatures in the eastern Pacific Ocean may be driving the massive die-offs. Indeed, this...

A similar mass pelican die off along the northern coast of Peru in 1997 was also linked to El Niño, which presumably caused a drop in anchovy populations—a staple food for marine and bird life in the region.

The same thing may be happening this year, Peru’s Deputy Agriculture Minister Juan Rheineck told Reuters. “We're starting from the hypothesis that it's because the birds are young and unable to find enough food for themselves, and also because the sea temperature has risen and anchovies have moved elsewhere.”