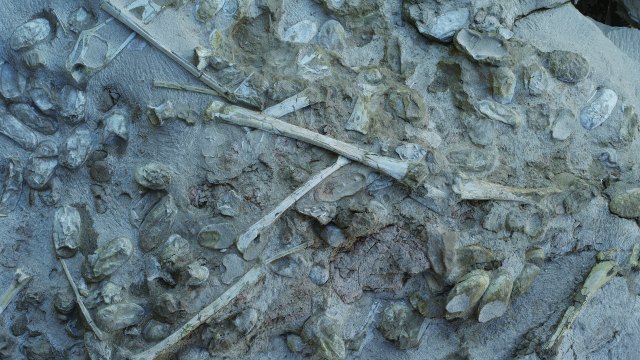 Pterosaur eggs and bonesWANG ET AL., SCIENCE, 2017In Science today (November 30), scientists describe a goldmine of fossilized pterosaur eggs discovered in northwest China. The collection of 215 eggs, along with bones of older individuals, all belonging to Hamipterus tianshanensis and in various stages of development, led the researchers to conclude that the flying reptiles nested together, and likely cared for their young for some time.

“[It’s] one of the most extraordinary aggregations of fossils I’ve seen,” David Unwin, a pterosaur researcher at the University of Leicester who was not involved in the study, tells Scientific American. “What really impresses me is that it captures almost an entire life history: eggs, hatchlings, juveniles, sub-adults and adults. Just to assemble that kind of evidence for any kind of vertebrate species is very difficult and very rare, and that you have it all on a contiguous piece of...

Unlike the handful of H. tianshanensis eggs collected previously, this latest batch included unsmashed eggs and more than a dozen with embryo remains inside. An analysis of the bones reveals that even the late-term embryos still had undeveloped bones, suggesting they required parental attention after hatching because they couldn’t yet fly. Other researchers suggest that these embryos were not close to hatching, however, and would have matured more fully in a matter of weeks or months, reports The Verge.

Despite such disagreement over how to interpret the find, there is no question over the magnificence of the fossils. “This is by far the most exciting discovery that I know of,” coauthor Alexander Kellner, a paleontologist at the National Museum of the Federal University of Rio de Janeiro in Brazil, tells The Washington Post.