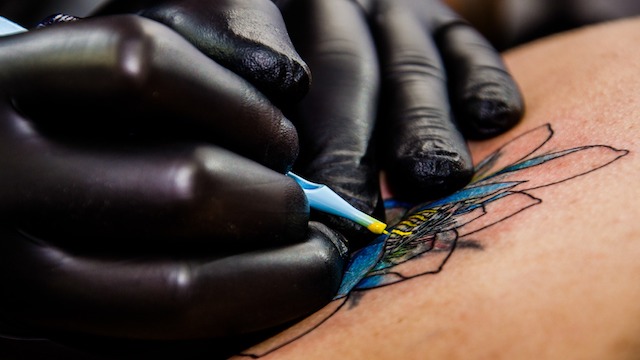 Cycling macrophages that guzzle ink on the skin of mice help keep tattoos in place, according to a study published yesterday (March 6) in the Journal of Experimental Medicine.

This research “shows that tattoos are in fact much more dynamic than we previously had believed,” Johann Gudjonsson, a professor of immunology and dermatology at the University of Michigan who was not involved in the study, tells The New York Times.

The investigation began when a group of researchers in France, while examining the skin of black mice, discovered macrophages that consumed pigment particles after melanocytes, the cells that produced them, died.

To see if immune cells were also present in tattoos, the team inked the tails of albino mice and found that the macrophages were, indeed, ingesting the ink particles on the tattooed skin. When the scientists killed off the immune cells, the tattoos remained—new ink-imbibing...

“The fact that macrophages hardly move within the skin explains why the tattoo is pretty stable,” study coauthor Sandrine Henri, a researcher at the Immunology Center of Marseille-Luminy, tells Scientific American. “Moreover, the pigment particles present in tattoo ink are quite big—and owing to their size they aren’t drained into the lymph nodes via the lymphatic vessels. So as soon as they are released by dying macrophages, they remain stuck until another macrophage ingests them.”

The study “really does provide a strategy to remove unwanted tattoos, in combination with conventional approaches, which could be especially useful for removing small tattoos in a well-defined location,” Simon Yona, an immunologist at University College London who was not involved in the new work, tells Scientific American.

Some physicians are already targeting the immune system to aid tattoo removal. According to the Times, Jared Jagdeo, a dermatologist at the University of California, Davis, has been using anti-inflammatory ointments after laser treatments since 2014. “It makes a difference,” he says.