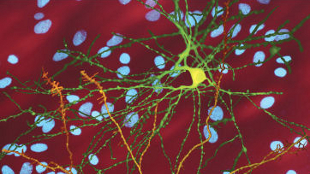 Scientists reviewing medical records from Swedish hospitals have found that a surprisingly low number of people with Huntington's disease developed cancer over the course of nearly 40 years. Only 91 out of more than 1,500 Huntington's patients (~6 percent) also came down with cancer from 1969 to 2008 in the Scandinavian country, researchers from Lund University and the Stanford University School of Medicine reported in The Lancet Oncology this week. This is 53 percent lower than levels of cancer seen in the general population.

Huntington's disease is caused by a genetic mutation that disrupts the production of proteins called glutamines, and earlier studies had shown similar cancer protective effects in other so-called polyglutamine diseases.

"Clarification of the mechanism underlying the link between polyglutamine diseases and cancer in the future could lead to...