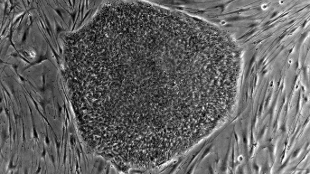 Human embryonic stem cell colony WIKIMEDIA, ID711Hwang Woo-Suk, a stem cell scientist who had two Science papers retracted in the mid-2000s, has continued his research on animal cloning at Sooam Biotech Research Foundation in South Korea. Earlier this month, the US Patent and Trademark Office (USPTO) approved a patent for the very same human embryonic stem cell line that was the subject of the fraudulent work. But the victory was short lived. Today (February 28), South Korea’s Supreme Court confirmed that Hwang is guilty of embezzlement and bioethics violations, although the court did uphold the acquittal of fraud charges. It bounced the researcher’s plea to overturn his dismissal from Seoul National University (SNU) back to a lower court for further review.

SNU first launched an investigation back in 2005, after questions emerged surrounding Hwang’s reports that his team had created the first stem cell line derived from a cloned...

Hwang’s legal battle has continued ever since. He was convicted of embezzling research funds and of illegally buying human eggs for his research by a trial court in October 2009, but was acquitted of fraud charges. An appeals court upheld the verdict, but reduced his two-year suspended prison sentence to 18 months, also suspended.

In terms of getting reinstated at SNU, an appeals court concluded in November 2011 that the university had been “excessively heavy” in its decision to fire him, ScienceInsider reported, but now that the criminal convictions have been finalized, the Supreme Court sent the case regarding his reinstatement back to the appeals court for review, though the odds are slim that Hwang will ever work for the university again.