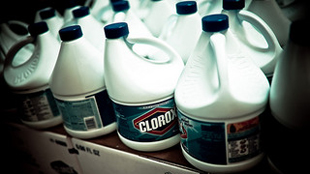 The investigators used Clorox.FLICKR, VOX EFXIt has long been known that extremely dilute bleach baths—0.005 percent—can be used as a successful accessory treatment for eczema, but until now, no one understood how it worked. Researchers from Stanford University have shown that hypochlorite (HOCl)—bleach’s active ingredient—effectively blocks the function of nuclear factor κB (NF-κB), which activates genes involved in inflammation and aging. Their work was published in the Journal of Clinical Investigation last week (November 15).

“Originally it was thought that bleach may serve an antimicrobial function, killing bacteria and viruses on the skin,” coauthor Thomas Leung said in a statement. “But the concentrations used in clinic are not high enough for this to be the sole reason,” he continued, “so we wondered if there could be something else going on.”

The team treated human keratinocytes with 0.005 percent HOCl and found that they were unable to...

“This research opens up the potential for new clinical treatments in the future,” Graham Johnson of the British Association of Dermatologists told BBC News. “However, it is worth noting that this research is just the beginning,” he added. “And although the science is sound, there are yet to be human clinical trials.”