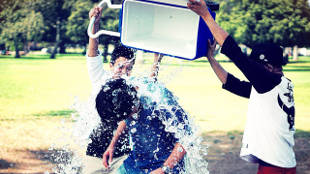 Last summer, amyotrophic lateral sclerosis (ALS) became the talk of the Internet, as hundreds of thousands of people filmed themselves dumping ice water over their heads and donated more than $220 million to the cause. While some were skeptical of how the funding would be used, much of it was devoted to ALS research, according to researchers in the field. A study published earlier this month (August 7) in Science is one example of ALS research made possible in part by charitable donations.

“Without it, we wouldn’t have been able to come out with the studies as quickly as we did,” study coauthor Philip Wong of Johns Hopkins University told The Washington Post. “The money came at a critical time when we needed it.”

The in vitro study detailed the role of a protein called TDP-43 in the formation of potentially harmful plaques in the brain. Instead of keeping unwanted exons in transcribed RNA from being translated into proteins, TDP-43 becomes “sticky,” the researchers found, clumping together and killing the cell. Treating the cells with a TDP-43 mimic, however, successfully rescued them.

The researchers now plan to test the compound in a mouse model of ALS. If it slows or stops the disease, they will proceed to human trials. And thanks to the money collected during last year’s Ice Bucket Challenge, they already have the funding for such trials, The Washington Post reported. 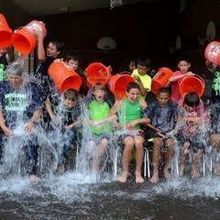