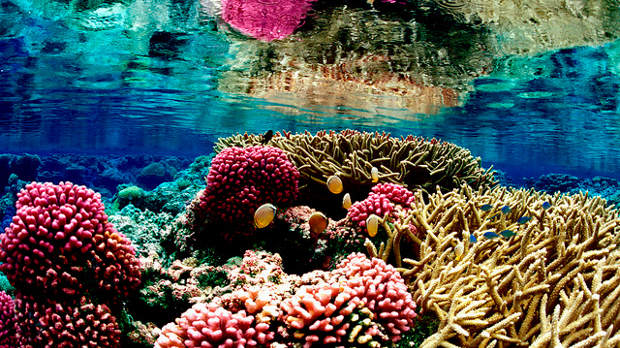 Coral reef at Palmyra Atoll National Wildlife RefugeFLICKR, USFWSIn the face of mass bleaching events wiping out vast swaths of coral reef, researchers are looking for factors that contribute to the colonial animals’ ability to withstand the warming waters that often instigates the problem. Analyzing the conditions of more than 2,500 reefs, Joshua Cinner of James Cook University in Townsville, Australia, and colleagues have identified 15 “bright spots”—marine ecosystems that are faring better than expected—as well as 35 “dark spots,” where the organisms are doing surprisingly poorly, according to a study published this week (June 15) in Nature.

“It’s absolutely a novel approach that brings together ecological and social information, and bridges approaches from human health and development to conservation,” Emily Darling, a marine conservation scientist at the Wildlife Conservation Society, an environmental group in New York, told Nature. “Identifying what conditions create bright spots is...

Study coauthor Nicholas Graham of Lancaster University in the U.K. agreed. “We can learn things from the bright spots about what to encourage,” he told Reuters.

The bright spots, which included the Chagos Islands in the Indian Ocean and Kiribati and the Solomon Islands in the Pacific, tended to have good resource management, local dependence on marine resources, and a culture that fostered protecting the ocean. The dark spots, which included Montego Bay in Jamaica and Lord Howe Island between Australia and New Zealand, tended to be closer to urban areas.

The work follows on the heels of a report that last summer’s bleaching event in the Great Barrier Reef may have killed up to half of the corals in the northern part of the reef.

Stay tuned for The Scientist’s July feature on coral bleaching and other marine maladies associated with warming oceans.