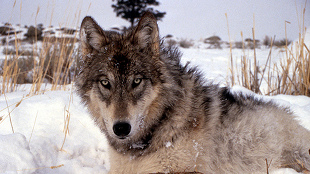 FLICKR, U.S. FISH AND WILDLIFE SERVICE - MIDWEST REGIONA new computer program can identify individual wild wolves by their howls with high accuracy, according to a study published yesterday (July 22) in the journal Bioacoustics. The technique should be useful for conservationists monitoring wild wolf populations.

Previously, computer programs for recognizing wolf vocalizations have relied solely on analyzing the pitch of the howls. These programs could correctly identify individual wolves up to 76 percent of the time.

The new method measures pitch, but it also measures the volume, or amplitude, of the wolfs’ calls. The researchers validated their program using recordings of the Eastern wolf that were in the collections of the British Library. When the program was tested against 67 high-quality recordings of wolf howls from 10 wild individuals, it matched the calls to individual wolves with 100 percent accuracy. The researchers also tested the program on...

“In scientific terms this is really exciting, because it means that if we hear a howl on one night, we can tell if it is or isn’t the same wolf that you hear on subsequent nights,” Holly Root-Gutteridge, a coauthor of the paper and a graduate student at Nottingham Trent University, told BBC Nature.