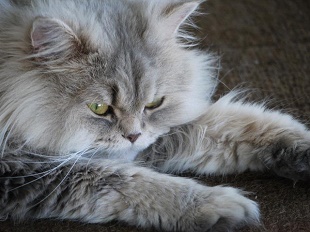 FLICKR, MAGNUS BRATHScientists who studied the mental hazards of owning a cat and the curative properties of nasal tampons made with pork were among this year’s Ig Nobel prize winners. The awards, which honor achievements that “first make people laugh and then make them think,” were presented at a Harvard University ceremony last week (September 18).

Hynek Burda of the Czech University of Life Sciences in Prague and his colleagues won the biology Ig Nobel for their research conducted on thousands of strolls with puppies. Observing 70 pets, the researchers reported that while pooping and peeing, dogs sometimes aligned their bodies with the earth’s geomagnetic axis.

Psychologist Kang Lee of the University of Toronto and his colleagues won the neuroscience prize for reporting that seeing the face of Jesus on burnt toast may be a normal function of way our brains process faces. “Sensory input with even the...

The prize in public health went to three teams who revealed the risks of feline companionship. Jaroslav Flegr of Charles University in the Czech Republic and his colleagues suggested that toxoplasmosis—a parasitic infection transmitted from cats to humans—could cause personality changes in young women, and raise the risk of schizophrenia in men. Mining electronic health records, Lisa Seyfried of the University of Michigan in Ann Arbor and her colleagues discovered that 41 percent of 750 patients with cat bites were depressed. “We were looking for anything interesting, and this one really jumped out as a strange and bizarre correlation” coauthor David Hanauer of the University of Michigan Medical School told New Scientist.

A “nasal tampon” crafted from cured, salted pork helped stop uncontrollable nasal bleeding in a 4-year-old with a life threatening condition, according to James Dworkin of Michigan State University and his colleagues, who won this year’s Ig Nobel in medicine.

Despite the humorous honor, Ig Nobel-winning research may find surprising uses in treating disease or solving scientific problems. The awardees are selected by the editors of the Annals of Improbable Research, who now receive approximately 9,000 nominations each year. “About 10% to 20% are self-nominations, but these entries hardly ever win,” editor Marc Abrahams told BBC News. “That’s generally because they are just trying to be funny. Whereas, those who win perhaps don't start out that way, and only realize later on that what they are up to really is kind of funny.”