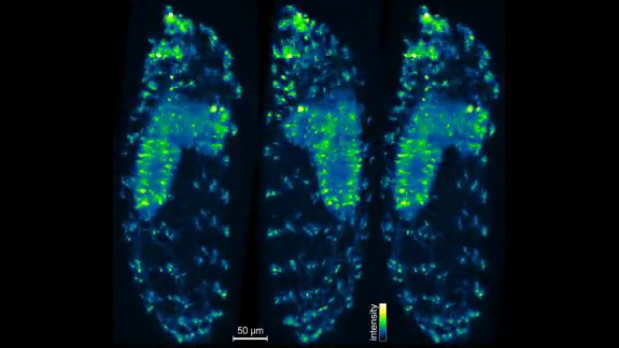 Projections of 3-D IsoView image data of an entire Drosophila larva expressing a fluorescent indicator or neural activity through the nervous system, including the brain, ventral nerve cord, and the peripheral nervous system. (See video.)KELLER LAB, HHMI/JANELIA RESEARCH CAMPUSPhilipp Keller of the Janelia Research Campus in Ashburn, Virginia, and his colleagues today (October 26) presented a new light microscope capable of imaging large, nontransparent specimens—such as a whole fruit fly embryo—at a speed and 3-D resolution that should allow them to probe biological processes in unprecedented detail. The team’s first target: the early development of a functioning nervous system in vertebrates. The researchers described the new microscope—the IsoView, which specifically boasts improved spatial resolution over the group’s previous microscopes—in Nature Methods.

“We had decent microscopes for the type of imaging that we do—rapid imaging of cellular dynamics in large, living specimens. The temporal resolution matched...

To improve resolution without compromising speed or other features of their microscopes, Keller’s group decided to collect multiple images from different angles simultaneously, using four objective lenses. While each image is still relatively low-resolution, by combining data from all the images, the researchers can reconstruct a good high-resolution view from all dimensions. “We don’t have a high-resolution image coming right out of the microscope,” Keller explained. “It’s still these four relatively low-quality images.”

With the help of computer scientist Fernando Amat, the group also developed the computational framework needed to compile the microscope’s data. But it’s a big job. The cameras will generate up to 3.2 gigabytes of data per second, meaning a one-hour experiment will yield about 10 terabytes of images for processing. The new software allows the researchers to process that data in about two days.

The group used the IsoView to visualize the development of the nervous system in living fruit fly larvae, following the cellular activity of what eventually becomes a network of more than 10,000 neurons. This is far larger than the 302 neurons of C. elegans, the only other animal whose entire nervous system has been imaged at the single-cell level. Because the larvae can move freely in a loose gel during imaging, Keller said in the release, “this opens up the possibility of functional imaging in an entire, behaving animal.” (See “Brains in Action,” The Scientist, February 2014.) The researchers also used the IsoView to image activity of an entire larval zebrafish brain, with deep brain regions clearly visible at the cellular level, and to track cells throughout the body of a developing fruit fly embryo.