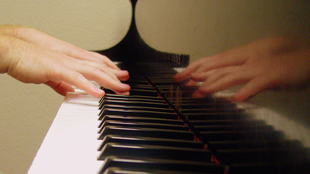 FLICKR, MIDIMANAnyone who has listened to jazz knows that at times the performers seem to be having a musical conversation. It now seems as though this conversation is reflected in the neural activation of the musicians’ brains. In a study published in PLOS One this week (February 19), researchers from the Johns Hopkins School of Medicine in Baltimore, Maryland, showed that some regions of the brain associated with language were active in the brains of two jazz musicians as they improvised with one another.

“Until now, studies of how the brain processes auditory communication between two individuals have been done only in the context of spoken language,” coauthor Charles Limb said in a statement. “But looking at jazz lets us investigate the neurological basis of interactive, musical communication as it occurs outside of spoken language.”

The team performed functional magnetic resonance imaging (fMRI) on the brains of eleven...

“It makes perfect sense,” Ken Schaphorst of the jazz studies department at the New England Conservatory in Boston, who was not involved in the work, told The Atlantic. “I improvise with words all the time—like I am right now—and jazz improvisation is really identical in terms of the way it feels.”