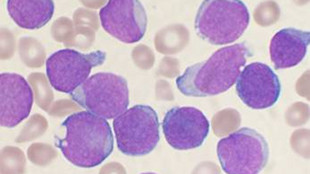 WIKIMEDIA, VASHIDONSKGene therapy has rid three adult patients of acute leukemia. The patients have been cancer-free for 5 months to 2 years, according to a study published last week (March 20) in Science Translational Medicine. Two other patients received the therapy, but one died for reasons believed to be unrelated, and the second died after relapsing.

“We had hoped, but couldn’t have predicted that the response would be so profound and rapid,” Renier Brentjens, lead author of the paper and an oncologist at Memorial Sloan-Kettering Cancer Center, told The New York Times.

The patients all had B-cell acute lymphoblastic leukemia and had relapsed following chemotherapy. The outlook for patients in this category is typically bleak.

The researchers filtered the patients’ blood for T-cells and engineered them with a virus carrying genetic material that would make them recognize CD19, a protein expressed on the surfaces of B-cells. When...

The four patients who went into remission also received bone marrow transplants following the therapy, although it is unclear whether the transplants contributed to their recovery.

This is the first time T-cell therapy has been used successfully to treat adults with acute lymphoblastic leukemia. Another treatment based on training T cells to attack cancerous cells is being developed at the University of Pennsylvania and is being used to treat childhood leukemia and chronic leukemia in adults.

The Sloan-Kettering approach for treating B-cell acute lymphoblastic leukemia will be tested in a second trial of 50 patients, New Scientist reported. The same idea could also be used to treat other cancers.

“Although it's early days for these trials, the approach of modifying a patient's T-cells to attack their cancer is looking increasingly like one that will, in time, have a place alongside more traditional treatments," Paul Moss, a cancer researcher at the University of Birmingham, told New Scientist.