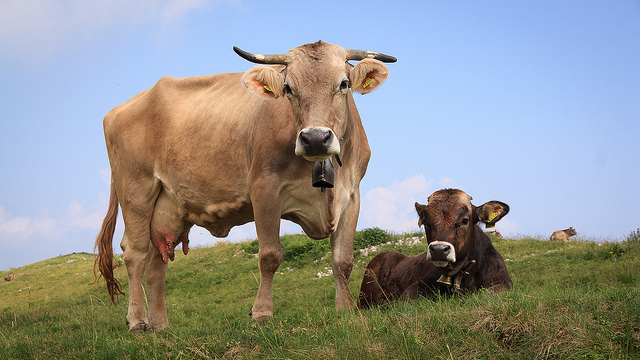 FLICKR, LESZEK LESZCZYNSKIScientists have long sought an HIV vaccine that would elicit the production of broadly neutralizing antibodies, which are thought to be key to stopping a wide range of viral strains. But this turns out to be a difficult task; only about 20 percent of HIV-infected individuals produce such antibodies. According to a study published today (July 20) in Nature, cows may be up for the job.

In the last few years, researchers have discovered that broadly neutralizing antibodies against HIV tended to be large, unruly proteins. Alongside this finding, other scientists happened to find that cows’ antibodies tended to be similarly large and unruly. “It was an alignment of the stars, where we had veterinarians, cow antibody scientists, and HIV scientists all talking and came up with this . . . relatively simple question to test,” Devin Sok, director for antibody discovery and development at...

Sure enough, immunizing four cows with a protein that mimics the HIV envelope, Sok and his colleagues were able to elicit the production of the broadly neutralizing antibodies they were after. Antibodies isolated from blood samples drawn from the cows in the first two months following immunization proved effective at blocking numerous HIV strains from infecting cells in vitro.

“I was shocked,” Sok tells TIME. “It was really crazy and very exciting. The responses developed very quickly—between one to two months—which is well beyond what we anticipated.”

With a little cellular engineering, the cow-made antibodies could one day be used for short-term protection or to treat HIV-infected individuals. It would be ideal to generate a vaccine to elicit the production of broadly neutralizing antibodies in people—a task that has yet to be achieved, John Mascola, director of vaccine research at National Institute of Allergy and Infectious Diseases (NIAID), which helped fund the study, tells STAT. “The study . . . doesn’t tell us how to make a vaccine for HIV in people,” he says, “but it does tell us how the virus evades the human immune response.”

Anthony Fauci, director of NIAID, agrees. “The kind of insight we get from studying this is an understanding of the mechanisms whereby the cows’ immune system is capable of creating these antibodies,” Fauci tells TIME.