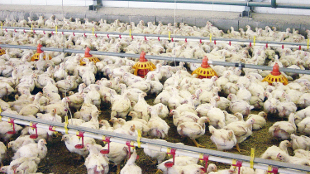 The controversial theory that vaccination against some viruses clears the way for their more-virulent relatives has garnered new support. According to a study published today (July 27) in PLOS Biology, inoculating chickens with a live Marek’s disease virus (MDV) vaccine can lengthen the disease transmission period, allowing stronger strains of the virus to reach unvaccinated birds, effectively increasing the virus’s fitness.

Unlike most human vaccines, the MDV vaccine reduces symptoms of disease, but does not prevent infection or viral shedding, making it what scientists call a “leaky” or “imperfect” vaccine. “Our research demonstrates that the use of leaky vaccines can promote the evolution of nastier ‘hot’ viral strains that put unvaccinated individuals at greater risk,” study coauthor Venugopal Nair, the head of the Avian Viral Diseases program at the Pirbright Institute in the U.K., said in a statement.

Nair and his colleagues infected...

“By keeping infected birds alive, vaccination substantially enhances the transmission success and hence spread of virus strains too lethal to persist in unvaccinated populations, which would therefore have been removed by natural selection in the pre-vaccine era,” Nair and his colleagues wrote in their paper.

Although the study did not show that vaccination caused MDV to mutate into more virulent forms, Nair said that the prolonged infection period within immunized chickens could give the virus more time to morph.

“Though, as far as I am aware, there is no direct evidence that this has actually happened in the field, it is a plausible risk that needs to be taken into account in designing vaccines,” Philip Minor, head of the National Institute of Biological Standards and Control’s Division of Virology, who was not involved in the work, said in a statement e-mailed to reporters. “These risks are already carefully considered . . . in implementing new human vaccine programs.”