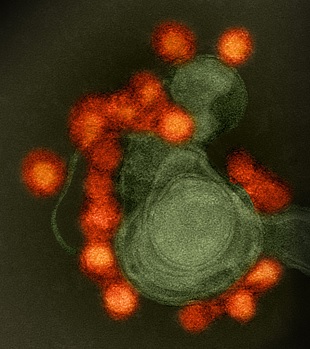 Zika virus (red) isolated from a microcephaly case in BrazilFLICKR, NIAIDZika virus has been linked to microcephaly in the babies of infected mothers, leading some organizations, including the Brazilian ministry of health, to focus on newborns’ head circumferences as an infection indicator. But this approach only identifies a fraction of Zika cases in newborns, researchers reported yesterday (June 29) in The Lancet, suggesting that measurements of head circumference should be combined with other criteria to provide a more accurate diagnosis.

“One in five definite or probable Zika cases had head circumference values in the normal range,” study coauthor Cesar Victora of the Federal University of Pelotas in Brazil said in a statement. “Therefore, the current focus on microcephaly screening alone is too narrow.”

In their review of 1,501 suspected cases of microcephaly investigated in Brazil between November 2015 and February 2016, the researchers also found that...

In another study published today in the same journal, a team led by researchers from the US Centers for Disease Control and Prevention (CDC) reported detecting Zika virus antigens in the neurons and glial cells of three deceased infants, adding support to the theory that the virus causes birth abnormalities by attacking the nervous system and impairing brain and muscle development.

“Until now, there have been no reports of a mosquito-borne virus that could cause severe birth defects,” study coauthor Sherif Zaki said in a statement. “We are continuing to investigate the possible spectrum of neurological defects in infants and various abnormalities in placental tissues, and further studies will now need to look at whether there is a link between birth defects and Zika virus infection during the second and third trimester of pregnancy, and understand the mechanism of transmission.”