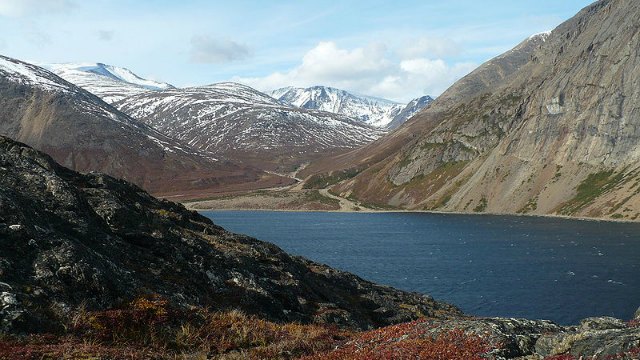 WIKIMEDIA, PAUL GIERSZEWSKIIn northeastern Canada, scientists have discovered what they believe are signs that bacterial life existed there 3.95 billions years ago—millions of years before the first fossils appeared in the geological record—according to a study published yesterday (September 27) in Nature.

Living organisms prefer the most common carbon isotope, 12C, to the rarer, heavier 13C for building their cells. Once decomposed, those 12C-rich organisms contribute to the 12C enrichment of their environment. Finding a sample, such as a mineral, enriched in 12C, therefore, can indicate that living organisms were present in the environment when that sample was formed. Study authors Yuji Sano and Tsuyoshi Komiya from the University of Tokyo found graphite enriched with 12C embedded within 3.95-billion-year-old rocks in Labrador.

This newly investigated graphite adds new evidence to the start of life on our 4.54-billion-year-old planet. As The Atlantic reports, the complexity...

Scientists have dated other graphite samples in the Greenland region, known as the Isua Belt, and in hydrothermal vents off the coast of Quebec to 3.8 billion years old or older. One study from 2015 detected graphite thought to be 4.1 billion years old—older than the graphite from the present study—within a gemstone in Western Australia.

All of these dating studies, The Atlantic notes, are somewhat controversial. In the latest study, the graphite’s purported age comes from the fact that it was lodged in 3.95-billion-year-old rock. But that rock is metamorphic, meaning it has been heated and warped over the years. To rule out the possibility that the graphite was younger but somehow made its way into the older rock, the researchers analyzed the graphite’s crystal structure. They found that the arrangement of graphite grains suggested it had undergone the same heating and warping as the surrounding rock and was likely just as old, according to The Atlantic.

Another source of controversy is that carbon ratios can vary for reasons unrelated to life. The researchers did not find fossils of the organisms that may have enriched this graphite with 12C, but they suspect that the responsible life forms were microbes.

“For the moment, it looks very convincing,” Daniele Pinti, a geochemist at the University of Quebec at Montreal, tells CBC News.

“The emerging picture from the ancient-rock record is that life was everywhere,” Vickie Bennett from Australian National University, tells The Atlantic. “As far back as the rock record extends—that is, as far back as we can look for direct evidence of early life, we are finding it. Earth has been a biotic, life-sustaining planet since close to its beginning.”