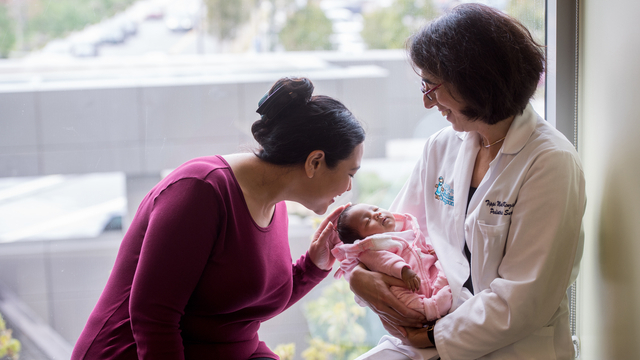 Pediatric surgeons at the University of California, San Francisco, have treated a second-trimester fetus with stem cells taken from her mother’s bone marrow. The baby, born in February, was the first patient enrolled in the world’s first clinical trial using stem cells transplanted prior to birth. She is “apparently healthy,” despite living with a deadly genetic disease called alpha thalassemia, according to a statement from the university.

Tippi MacKenzie, a pediatric surgeon at the University of California, San Francisco (UCSF) Benioff Children’s Hospital, led the team that performed the transplant. “It is too early to say how effective the stem cell transplantation will be, but we are encouraged by how well she and her mother have tolerated the treatment,” she says in the statement. “Her healthy birth suggests that fetal therapy...

The baby, Elianna Constantino, was born on February 1 to Nichelle Obar after five blood infusions and one stem cell transplant over the course of four months in a clinical trial funded by the California Institute for Regenerative Medicine. The trial began in 2016 to investigate using stem cells to treat thalassemia. Constantino has a lethal form of it, called alpha thalassemia major, which is caused by abnormalities on the HBA1 and HBA2 genes, reduces the body’s ability to produce hemoglobin, according to the National Institutes of Health’s Genetics Home Reference, and can cause swelling of the liver or heart. Babies with alpha thalassemia typically die before birth or are stillborn.

During pregnancy, a routine ultrasound performed at a medical center in Hawaii, where the family resides, detected the fetus had an enlarged heart. According to the UCSF statement, intrauterine blood transfusions were required to treat the swelling before the stem cell transplant could be performed. The transplant was given during one of the transfusions.

“Elianna’s doing great,” Obar tells The New York Times. “I’m not disappointed at all. If it works, great. If it didn’t, we’re O.K. with it. We’ll celebrate all the little accomplishments. I’m glad we did it.”

“Once universally fatal, thalassemia can now be managed as a chronic disease,” says Elliott Vichinsky, a hematologist and the founder of the Northern California Comprehensive Thalassemia Center at UCSF Benioff who is overseeing the baby’s treatment, in the statement. “In utero stem-cell transplantation may take it one step further: as a disease that can be successfully treated before birth.”

“Everybody has a perfect donor when they’re a fetus, and that’s the mom,” MacKenzie tells The New York Times. According to the article, she plans to perform a few more transplants, monitor the patients’ progress, and then decide how to proceed.

Correction (May 31): The original version of this story erroneously stated the fetus was the first to receive a stem cell transplant in utero; she is the first to have recieved such a transplant as part of a clinical trial. The article has been corrected to reflect this; The Scientist regrets the error.