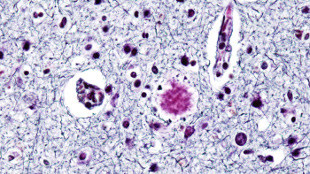 Plaques in the cerebral cortex of a patient with Alzheimer’s disease.WIKIMEDIA, KGH

Growing stem-cell-derived neurons in a gel matrix has enabled researchers to reproduce the hallmarks of Alzheimer’s disease in vitro for the first time. The cell culture model, reported yesterday (October 12) in Nature, overcomes several limitations of mouse models and cultured neurons commonly used to study the disorder.

Because the gel matrix allows neurons to form networks similar to those in the brain, overexpressing genes with Alzheimer’s-linked mutations causes the cells to develop the amyloid plaques and neurofibrillary tangles characteristic of the disease.

In mouse models, researchers have observed either plaques in the brain or tangles, but never both in the same brain. Drug molecules tested in mice have often appeared promising, but then failed in humans. “The lack of a viable model for Alzheimer’s has been the Achilles’ heel of the field,” P. Murali Doraiswamy,...

In the 1980s, George Glenner of the University of California, San Diego, first proposed the amyloid hypothesis—the idea that aggregates of beta-amyloid protein initiate a series of events leading to Alzheimer’s dementia. The appearance of plaques and tangles in vitro lends support to this hypothesis, study coauthor Rudolph Tanzi, a neuroscientist at Harvard Medical School, told The New York Times.

Tanzi and his colleagues used the cell cultures to test two inhibitors of the beta-amyloid accumulation that produces plaques in the brain, as well as inhibitors of a protein that phosphorylates tau—the protein responsible for the tangles that choke off neurons. The team plans to examine the effects of thousands of already-approved and experimental drugs using the new culture system.