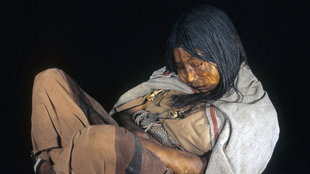 The Ice Maiden, a mummified 13-year-old girl discovered in a shrine atop an Argentinian volcanoJOHAN REINHARDThree Inca children found mummified in a shrine near the peak of a 6,700-meter Argentinian volcano consumed vast quantities of corn alcohol and coca, the plant from which cocaine is derived, for a year before they were sacrificed as part of their society’s religious practices. The children, a 13-year-old girl known as the “Ice Maiden” and a boy and a girl between the ages of 4 and 5, were likely sedated to keep them compliant in the death ritual, according to the authors of an analysis of the mummies published Monday (July 29) in the Proceedings of the National Academy of Sciences.

The 500-year-old mummies are among the most well-preserved samples ever discovered, mostly due to the frigid conditions of the high altitude tomb in which they were found in 1999. (See...

Wilson and colleagues suspect the children were marched from the Inca capital of Cuzco to the volcano, Llullaillaco, stopping along the way to consume massive amounts of alcohol and coca in village ceremonies. The Ice Maiden, whose body was discovered cross-legged and slumped slightly forward as if she was sleeping at the time of her death, was also found with a large wad of chewed coca leaves in her mouth.

A previous analysis by Wilson’s group revealed a marked improvement in the nutritional content of the children’s diet in the year before their death, indicating they were well cared for in preparation for the sacrifice ceremony. Also, in the current study, scans of the Ice Maiden’s body suggested she died on a full stomach and had not recently defecated. “To my mind, that suggests she was not in a state of distress at the point at which she died,” Wilson told LiveScience.