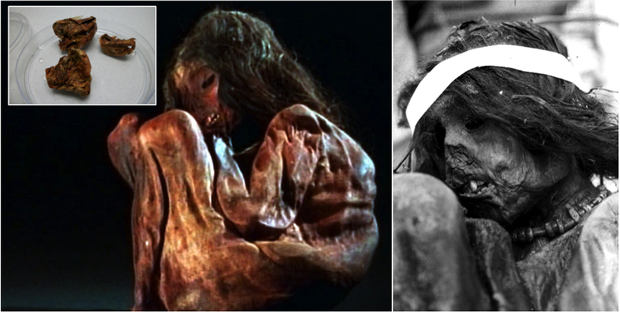 The Inca boy was killed as part of a ritual of child sacrifice called capacocha. Researchers extracted mitochondrial DNA from lung tissue (inset) pulled from the mummy. PHOTO REPRODUCED FROM SCIENTIFIC REPORTS WITH THE PERMISSION OF THE UNIVERSITY OF CUYO PUBLISHER (ARGENTINA)Ancient mitochondrial DNA from a 7-year-old boy who was sacrificed in an Incan ritual 500 years ago is yielding surprising clues about the genetic makeup of Native Americans. Researchers led by geneticist Antonio Salas of Spain’s University of Santiago de Compostela sequenced the mitochondrial genome of the so-called Aconcagua boy and identified a novel genetic subgroup that likely arose in the Andes more than 14,000 years ago. The team published its findings last week (November 12) in Scientific Reports.

“It’s only one individual, but it’s a specific sub-lineage in a restricted geographic area,” Lars Fehren-Schmitz, a geneticist and anthropologist at the University of California, Santa Cruz,...

The researchers targeted mitochondrial DNA (mtDNA) from the boy’s lung, as it was a tissue that was unlikely to have suffered contamination since the body was discovered in 1985 by hikers climbing Argentina’s Aconcagua mountain. The corpse had been essentially mummified by the site’s dry air and cold temperatures. “You assume . . . no one has touched the lung with their own hands, so there is no contamination from the people who have been working on it,” Bastien Llamas, a geneticist at the University of Adelaide in Australia who was not involved in the study, told Science.

Salas and his colleagues noticed that the boy’s mtDNA sequence placed him in a population of native South Americans known as C1b. But he appeared to have a novel enough arrangement of genes to warrant classification in an exceedingly rare genetic subgroup, called C1bi. The researchers postulated that the subgroup likely arose in the Andes around 14,000 years ago, and they found only four more individuals—three modern individuals from Bolivia and Peru one from the ancient Wari Empire of Peru—in genetic databases that belonged to C1bi. Salas and his collaborators attribute the rarity of the subgroup to the vast numbers of Native Americans who were wiped out after European contact in the 15th century. The Aconcagua boy’s genome represents a “window to 500 years ago,” Salas told Science.

Salas is now working to sequence the entire nuclear genome of the mummy as well as the genomes of the boys gut and infectious microbes, according to Science.