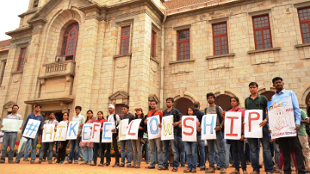 FACEBOOK, HIKE RESEARCH FELLOWSHIPIn an attempt to get the pay raise they were promised, at least half a dozen Indian graduate students last week initiated a hunger strike, with thousands more taking to the streets in a nationwide protest, ScienceInsider reported. In response to protests last July, India’s Department of Science and Technology (DST) announced in October that graduate student monthly wages in the first two years of a five-year program would be raised from $257 (16,000 rupees) to $401, and from $289 to $482 for the last three years, Nature reported. In December, the University Grants Commission, which also supports graduate students, announced a similar increase in salary. But for many, those pay raises never came. Moreover, many students get paid with as much as a half year’s delay, or not until the end of the financial year.

“We are still struggling for a notification from...

The hunger strike was initiated on February 16 by 29-year-old biomolecular imaging PhD student SivaRanjan Uppala, who is currently studying at the Indian Institute of Science Education and Research, Mohali. At Jantar Mantar, an ancient astronomical observatory near New Delhi, Uppala set up camp, refusing to eat. Soon, other frustrated graduate students—from the Indian Institutes of Technology; the All India Institute of Medical Sciences, New Delhi; Jawaharlal Nehru University; the India’s Defence Research and Development Organisation; and nearly 100 other research institutions across the country—flooded in to show their support, marching in the street and boycotting labs. Jain estimates that a total of some 15,000 to 20,000 students have taken part in the protests.

Altogether, three Indian agencies have agreed to pay raises for grad students, but the question remains of when students will actually see the changes. “In the same laboratory, if some students are DST fellows and some are MHRD fellows, some will get the hike later than others,” Anindita Brahma, the general secretary of the student council at the Indian Institute of Science, told Science. And protest leaders are concerned that MHRD’s concession may have eliminated the salary bump students typically receive in their third year of school.

“We are all passionate about science, but money does matter too to sustain this interest,” Lipi Thukral, a computational biologist at India’s Institute of Genomics and Integrative Biology, told Nature. “That is one reason India loses so many young researchers to the West.”