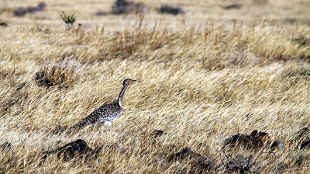 A houbara bustard on the Canary IslandsWIMIMEDIA, CHMEE2The houbara bustard (Chlamydotis undulate), a bird that inhabits dry scrublands in Northern Africa, suffers at least one of the downfalls of growing older that may afflict several other animal species: declining reproductive fitness. And researchers studying a decade of data gathered from birds involved in a captive breeding program have provided a quantitative glimpse at just how bad it gets for older bustards, especially males. The international team of scientists published the work this week (February 3) in Nature Communications.

Houbara bustards can live in excess of 20 years, but Brian Preston, a researcher at the University of Bourgogne in France, found that after age 6, both males and females experienced declines in the performance of their respective gametes. Preston’s team analyzed 10 years’ worth of data collected at a Moroccan breeding, where staff had monitored the...

They found that eggs made from inseminating older females with sperm from older males were less likely to hatch. And they discovered that males that were a decade removed from their reproductive prime—three to six years old—were 7 percent more likely to create eggs that wouldn’t hatch than younger males. Of the eggs that did hatch, those chicks fathered by older bustards grew slower through their first month of life than birds that resulted from a mating of younger parents.

The authors suggested that the root of the age-related gamete decline lay in DNA that sperm deliver to egg cells. Older birds likely make sperm with more accumulated DNA damage and mutations than younger birds. And that may be a phenomenon that exists in many species beyond bustards.