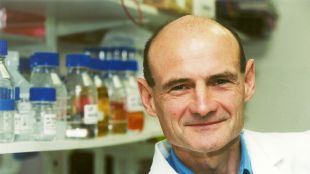 THE INSTITUTE OF CANCER RESEARCH, LONDON

Chris Marshall, whose worked uncovered the oncogene NRAS and characterized the role of the RAS protein in cell division and cancer, died of colorectal cancer on August 8. He was 66.

“His research paved the way for four new classes of cancer drug to enter the clinic, two of which have been approved for widespread use in patient treatment today,” according to an announcement by the Institute of Cancer Research, where Marshall served multiple roles since 1980, including director of research and the head of cancer biology.

Marshall’s early work on NRAS was done in collaboration with the late Alan Hall. In a memorial of Hall, Marshall earlier this year recounted the frustration he and his colleague felt when looking for human genes that could transform cells into cancerous states. A screen of 60 genes had failed when they hatched a plan...

The discovery would chart the course for both researchers’ accomplished careers. Marshall went on to dissect RAS’s signaling pathway. “[H]is unique contribution lay in the subsequent decades of painstaking work to reveal how RAS instructs cells to divide and move, and how the cancer-associated mutations lead to an inability to control these activities,” Karen Vousden, a cancer researcher at the University of Glasgow who trained with Marshall, wrote in The Guardian.

Marshall’s colleagues have long described his unceasing devotion to the science—experiments included. “I called him on his 60th birthday [in January] and he was doing a phosphate-labeling experiment,” Vousden told The Scientist in 2009. “That sums Chris up. He’s a huge figure, an internationally renowned scientist. And he’s in the cold room on his birthday doing an experiment. How could you not love that? How could that not inspire you?”

Marshall is survived by his wife, three children, and four grandchildren.