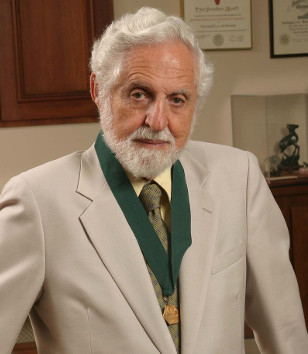 Carl Djerassi in 2004WIKIMEDIA, CHEMICAL HERITAGE FOUNDATIONBest known for his contribution to the development of oral birth control, chemist Carl Djerassi died last week (January 30) of complications from cancer. He was 91.

After earning an undergraduate degree from Kenyon College in Ohio, Djerassi received a PhD from the University of Wisconsin-Madison in 1945. He then joined pharmaceutical company Ciba (now Novartis) before moving to drugmaker Syntex in Mexico City, where he made his pioneering discoveries on cortisone, menstrual disorders, and cancer, The New York Times (NYT) reported.

“Yes, I am proud to be called the father of the pill,” Djerassi told The Guardian in August 2000 (via NYT). “But identifying scientists is really only a surrogate for identifying the inventions or discoveries. Maybe it is true that Shakespeare’s plays would never have been written if it wasn’t for Shakespeare. But I’m certain that if...

Outside of the lab, Djerassi was an avid patron of the arts. Among other things, he was a published author and playwright. “As my small personal contribution to a better understanding of some of the unwritten rules of scientific behavior, I have chosen an infrequently used literary genre: science-in-fiction, in which the plot is populated by real scientists doing plausible science and the events occur in realistic settings,” Djerassi wrote in The Scientist in July 1990.

He is survived by his son, stepdaughter, and a grandson.