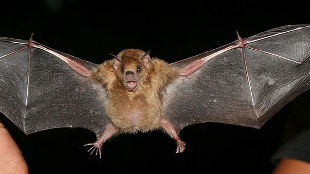 Scientists have discovered another flu strain in a completely novel flu reservoir—bats. According to a study published today in the Proceedings of the National Academy of Sciences, some bats in Central America harbor a strain of influenza that, while genetically distinct from the one that afflicts the human population on a seasonal basis, may have implications for the evolution of the human virus.

“Despite its divergence from known influenza A viruses, the bat virus is compatible for genetic exchange with human influenza viruses in human cells, suggesting the potential capability for reassortment and contributions to new pandemic or panzootic influenza A viruses,” the authors wrote.

Ruben Donis, chief of molecular virology and vaccines in the influenza division at the Centers for Disease Control and Prevention (CDC) in Atlanta, Georgia, and colleagues identified the virus in two populations of yellow-shouldered bats in Guatemala, and...

“We are far away from speculating on any pandemic potential of this virus, but finding this ancient influenza subtype stresses again that bats are an important source of animal viruses," Ab Osterhaus, head of virology at Erasmus Medical Center in Rotterdam, the Netherlands, who was not involved in the work, told Nature. After all, “most influenza A viruses circulate in waterfowl, but those that infect mammalian hosts are thought to pose the greatest risk for zoonotic spread to humans and the generation of pandemic or panzootic viruses,” the authors wrote.