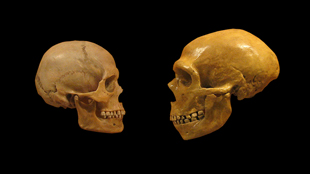 Models of modern human (left) and Neanderthal skullsWIKIMEDIA, MATT CELESKY, DRMIKEBAXTERResearchers have previously shown that early humans and Neanderthals interbred, and that modern human genomes contain elements inherited from Neanderthals. Now, two independent groups have characterized the extent to which Neanderthal genetic information is found in humans today. Their work was published in Nature and Science yesterday (January 29).

In Science, Benjamin Vernot and Joshua Akey of the University of Washington identified candidate regions that may have come from Neanderthals in whole-genome sequences from 379 Europeans and 286 East Asians. Then they compared those sequences to the Neanderthal reference genome and found that about 26 percent of protein-coding genes had exons that shared sequences with the Neanderthal genome. Their findings suggested that Neanderthal genes contributed to the phenotype of skin in early humans, but “we don’t understand enough about the biology of those particular genes yet,”...

And in Nature, David Reich of Harvard Medical School and his colleagues began by comparing the genomes of 1,004 modern humans to the Neanderthal genome. They used the genomes of modern Africans as a kind of negative control, as Neanderthals inhabited Europe and Asia, but not Africa. The researchers also found that Neanderthal DNA may have contributed to the evolution of skin and hair in modern humans. Additionally, the team pinpointed several Neanderthal-derived alleles that contribute to the risk of diseases—including type 2 diabetes, Crohn’s disease, and lupus. The team also identified modern genome regions that had about fivefold less Neanderthal DNA than the rest of the genome—most notably on the X chromosome, which suggested that Neanderthal genes might have contributed to reduced fertility.

Sriram Sankararaman of Harvard Medical School, a coauthor on the Nature paper, told the Times that the related findings of the two papers carry weight because they were found in different ways. “The two methods seem to be converging on the same results,” he said.