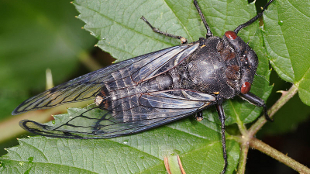 A redeye cicada (Psaltoda moerens )WIKIMEDIA, FIR0002/FLAGSTAFFOTOSIt’s one of the first natural surfaces found to kill bacteria simply by virtue of its physical structure, Nature reported: an array of hexagonal “nanopillars” on the wings of a clanger cicada (Psaltoda claripennis) can put enough strain on bacterial cells to rupture them. The findings, published last month (February 19) in Biophysical Journal, detail how this nanoscale structure can be so deadly.

Elena Ivanova of Australia's Swinburne University of Technology and colleagues found that the nanopillars do not puncture the bacteria. The structures look more like blunted spikes when viewed on the scale of bacteria, which stick to the tips of the nanopillars, then stretch into the hexagonal spaces between them, putting extreme strain on the cell.

“[It’s like] the stretching of an elastic sheet of some kind, such as a latex glove,” Ivanova told Nature....

The nanoscale defense only appears to work on bacteria with relatively soft membranes, however; those with greater membrane rigidity could survive the stretch of the pillars.

The study does hint at a new strategy for antibacterials, chemical engineer Anne-Marie Kietzig of McGill University in Montreal, Canada, who was not involved in the study, told Nature. Commonly contaminated materials, such as public railings, she said, could be made to mimic the structure. “This would provide a passive bacteria-killing surface. . . . [It] does not require active agents like detergents, which are often environmentally harmful.”

(See the Nature story for an animation of how the nanopillars can burst bacterial cells.)