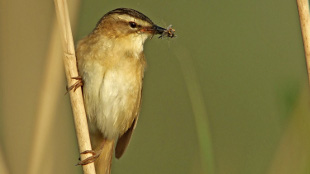 Sedge warblerWIKIMEDIA, GABRIELBUISSARTLong linked to declining bee populations, insecticides called neonicotinoids might also be responsible for observed declines in bird populations, as a result of having fewer insects to eat, according to a study published in Nature this week (July 9). Researchers from the Radboud University Institute of Water and Wetland Research have shown that bird populations in the Netherlands have shrunk in areas with higher surface-water concentrations of the neonicotinoid insecticide imidacloprid.

“Our results suggest that the impact of neonicotinoids on the natural environment is even more substantial than has recently been reported and is reminiscent of the effects of persistent insecticides in the past,” the authors wrote. “Future legislation should take into account the potential cascading effects of neonicotinoids on ecosystems.”

Last April, the European Commission  announced that it would severely restrict the use of neonicotinoids for two years in attempt to protect bees....

Jean-Marc Bonmatin of France’s National Center for Scientific Research, who has studied the impacts of neonicotinoids but was not involved in the work, told Chemical & Engineering News that “the researchers demonstrate a clear correlation of a cascading effect with imidacloprid contamination—it is beyond the direct effects that are already known on pollinators and soil invertebrates.”

“This is definitely not proof of causation,” lead author Caspar Hallmann told The Independent. “However, there is a line of evidence building up suggesting that something is going on here. We know insects have declined in these areas and that insects are an important food for these birds.”